Due to the use of federal transportation funds for construction of the Washington Baltimore & Annapolis Trail bridge over the Patuxent River, the M-NCPPC Department of Parks and Recreation (DPR) must allow 15 days for public comment on our recommendation that this federally-funded project will not inappropriately cause damage or otherwise diminish the park land that will be impacted by construction or the bridge’s ongoing presence. DPR proposes to recommend to the Federal highway Administration, that our 4(f) finding is that negative impacts are minimal (de minimis) and largely temporary in nature, thus federal-funding for this project will not result in an adverse impact on public park land. Starting June 28, 2019, you can complete an online form and share your comments about this recommendation with Darin Conforti, Acting Director of the Department of Parks and Recreation. Deadline to submit your comments is July 12, 2019.
In compliance with Section 4(f) of the U.S. Department of Transportation Act of 1966 (49 USC 303), hereinafter referred to as "Section 4(f)," and its implementing regulations codified at 23 CFR Part 774, the Maryland-National Capital Park and Planning Commission--Prince George’s County Department of Parks and Recreation (M-NCPPC-DPR) is notifying the public that it will request the Federal Highway Administration (FHWA) make a de minimis (minor impact) finding in accordance with Section 4(f) regarding the permanent effects of the proposed WB&A Trail Bridge - Bridge at the Patuxent River through Patuxent River Park in Prince George’s County and to provide the opportunity for public review and comment of this proposed determination.

Section 6009(a) of the Safe, Accountable, Flexible, and Efficient Transportation Equity Act: A Legacy for Users (SAFETEA-LU) allows the FHWA to determine that certain transportation uses of Section 4(f) land will have no adverse effect on protected resources. With respect to publicly owned parks and recreation areas, a finding of de minimis impact may occur if a transportation project does not ''adversely affect the activities, features and attributes" of the Section 4(f) resource. When this is the case, the finding by FHWA requires written concurrence from the official(s) with jurisdiction over the resource. Public notice and opportunity for public review and comment on the finding is also required. 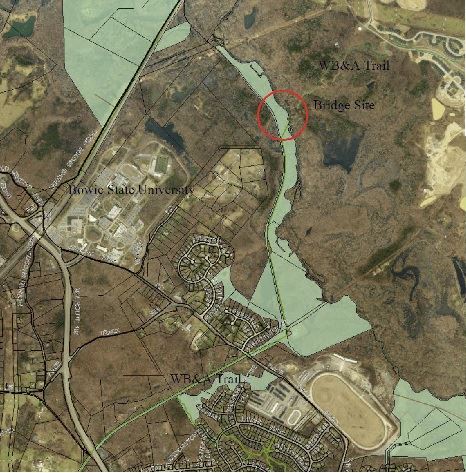 The purpose of the WB&A Trail - Bridge at the Patuxent River project is to construct a missing segment of bicycle and pedestrian trail (shared use path) between two existing trail systems having local, regional and national transportation benefits. These trail systems include the now separate WB&A Trails in Prince George’s and Anne Arundel counties, which are rail-trail conversions of major portions of the Washington Baltimore and Annapolis railroad rights-of-way. The bridge will make these trail systems inter-jurisdictional and provide a continuous off-road bicycle and pedestrian trail that will serve as an integral part of both the East Coast Greenway and American Discovery Trail, two national trail systems running from Maine to Florida and Delaware to California, respectively. Proposed improvements include a minimum 12-foot clear bridge structure, decking, piers and abutments, foundations, railings, fencing, signage, excavation, backfill, clearing and grubbing, environmental mitigation, stormwater management, pavement, storm drainage facilities, stabilization, landscaping, erosion control devices, staging areas and temporary access roads, and other construction-related items. There will also be approximately 100-feet of paved trail approaches that connect the existing trails in each County to the proposed bridge. The installation of the bicycle/pedestrian bridge, trail approaches, and related improvements will involve permanent and temporary construction impacts to Patuxent River Park in Prince George’s County, owned and managed by M-NCPPC, and to the WB&A Trail corridor in Anne Arundel County, managed by the Anne Arundel County Department of Recreation and Parks (DRP). Due to the nature of the work of adding a trail segment within the existing parkland, no change in ownership of the land will occur. Although construction of a trail is considered a "use" as defined by Section 4(f) of the U.S. Department of Transportation Act (1966), there will be no negative impact on the activities, features, and attributes that qualify the park area for protection under Section 4(f). M-NCPPC-DPR and the Anne Arundel County Department of Public Works are currently seeking concurrence with M-NCPPC and the Anne Arundel County DRP as the officials with jurisdiction, regarding the de minimis finding. Comments regarding the proposed Section 4(f) de minimis impact findings may be submitted to the Prince George’s County Department of Parks and Recreation in writing or through the DPR website during the 15-day comment period through July 12, 2019. Written comments should be mailed to: Darin Conforti, Acting Director Prince George’s County Department of Parks and Recreation (M-NCPPC) 6600 Kenilworth Avenue Riverdale, Maryland 20737
/QuickLinks.aspx
/QuickLinks.aspx